Personal Stories: The Mystery of the Missing Skull Pail 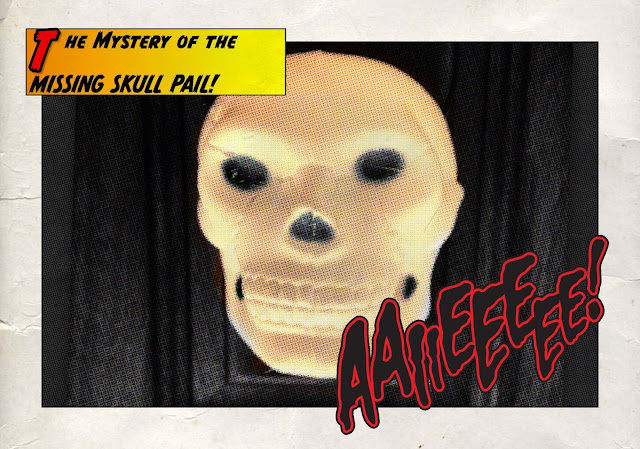 Guillermo del Toro said "The point of being [older] is to fulfill the desires you've been harboring since you were seven."
Well I had a cool plastic Halloween skull bucket when I was a kid, and I want it back...
The quest began with some deja vu:
I was at Cost Plus World Market way back in 2010 looking at their latest Halloween wares and I was drawn to a giant glow-in-the-dark skull candy bucket.  It seemed oddly familiar.  I circled it.  Browsed the store.  Circled back again to pick it up and turn it over in my hands.  Why was I drawn to this?  It didn't make sense.  Even the gummy candy contained within wasn't really my bag, but just I kept coming back to it.

Then suddenly a memory was unlocked in my brain:  MY CHILDHOOD SKULL PAIL!
I had completely forgotten about it 'til that moment.
Here's the deal:  when I was about 6 or 7, I remember getting a Halloween gift from my grandparents-- a small skull bucket filled with candy.
I LOVED that thing.
LOVED IT.
I loved it to the point that I kept it in my bedroom closet and used it to hold the various trinkets from childhood:  tokens for the arcade, change from my allowance, Star Wars figure weapons, what have you.
Somewhere over time, the skull pail was lost.  Discarded.  Thrown away.  Stolen by the gremlins that steal childhood things.
But I was an adult, with a paycheck, and the power of a magical thing called "the internet"--- and I was going to find a new one.
If I could remember what it was, that is.

Being a pretty good internet searcher, I began scouring the net looking for THE skull pail I had as a kid.
In my memory, mine was white, and not very big.  And I eventually was drawn to this one which was being sold on eBay...
The dimensions seemed correct (it wasn't as big as the Cost Plus one I originally saw, or even as big as the generic plastic jack o' lantern pails they sell at .99 Cent stores and everywhere else), and the handle seemed right, and I believed the face of the skull (the most important part) was correct.  But the glow-in-the-dark-ish green tinge seemed wrong (was that just the photo?), and the more I stared at it, the more I realized that something was off.  It didn't feel right.
Memory is a funny thing.  It warps over time, and it is easily influenced.  The more I searched, the more skull buckets I saw, and the more the few details I had in my head began to get muddled.
When I discovered that the eBay listing pail (the one the seller had declared was "vintage") could be purchased in bulk from a couple big party suppliers, I knew I was on the wrong trail.
I tried calling my family-of-origin.  None of them knew what I was talking about.  In fact my sister said "HOW do you remember these things?"
I remember because it MEANT something to me.  It was a little piece of joy.
Between the skull bucket and the Beistle skeleton that hung from my bedroom door:  it was Halloween.
And unlike the Beistle skeleton:  it was MINE.
I set up my eBay and internet searches.  And I waited.
A few years passed and then, when scanning a posted 'Lot' of various Halloween items, I had a breakthrough.  Nestled in amongst a bunch of random Halloween decorations, was this skull bucket:
My heart started racing.  That was it.  That was IT.  Those cloudy memories instantly started becoming clear.  The airbrushed black eye dots.  The skull cracks.  The side view offered more clues to its accuracy:
The jawbone that, if you looked at it the right way, looked like a Vulcan ear.  The thin handled.
The only thing missing from the photos was the top view.  This was important because if it was hollowed-out, wide open, it was wrong.  I distinctly remember the hole on the top of the skull being very small.  Large enough to fit loose candy corn, and some fun-sized snickers, but small enough that even my child hand couldn't fit into it.  In order to get the candy out I had to turn it upside down and shake it like a candy piggy bank.  I would have reached out to the seller and asked the question, but unfortunately the listing had already ended.  I DID glean one important search term from the listing though.  "Pail."
Up until this point I was using words search terms like "treat bucket" but the word "pail" hadn't occurred to me.  I updated my searches and waited more.
And then, one day.  There it was.  A listing popped up, the first of its kind, and it was JUST for the skull pail, by itself.  In mint condition.  Old stock re-found.  It was also ridiculously expensive.  I thought long and hard about spending that much money on something that probably cost .99 cents back in the day.  But at this point the quest had a hold of me, and there was no way I was going to let this one go.  There was no "Buy It Now" so I set my bids to ridiculous but I'm-Going-To-Win-This-No-Matter-What levels.
And won.
Behold in its glory:
I'm considering it a minor miracle that I found this.  The bottom has no company stamps or other identifiers on it (if someone is an authority and can conclusively tell me that it's a "Blargy-Blarg Hoo-dinker from the Blargety company," I welcome your input in the comments).  Sure the search terms "blow mold" and "skull" turn up many different items to choose from.  But ones like THIS don't come along too often.  I know.  I've still got my searches set up all these years later, and they just don't surface.
When the box with my winning auction showed up in the mail, I tore into it and held that skull like Indiana Jones admiring the fertility idol for the first time.  It was glorious.  There was that skinny handle.  There was that Vulcan-ear-jaw.
But most of all there was that small hole in the top.  There was no way my adult hand would fit in it (I tried, TBH).  And it was still waaaaaaay too small for a kid hand too.

Just the act of trying to reach my hand in provided an additional sense memory:  the feel of the plastic cutting into my hand as I attempted to get a Nestle Crunch mini.  My grandparents were always buying Nestle Crunch bars for us kids... it's not even something we necessarily LIKED, but they always got them for us.  And we ate them.
The skull sits on my desk during the Halloween season, and is safely tucked away in the orange bin with the black lid the other months of the year.  Like my quest for Halloween soda, the quest for my skull pail was less about the item itself, and more about the experience.  That itch that couldn't be scratched, was really just memories trying to get out.  My grandparents are long gone, but I remember that skull sitting on their dark wood-laminated dining room table.  The tiny, almost in-audible, buzzing sound the clock above the stove made on the hour.  The high-pitched cackle of my grandmother's laugh when she saw us kids dressed in our Ben Cooper costumes.  The cabinet where the Nestle crunch bars were kept, and the sound of the Halloween candy dropping into the bottom of plastic trick or treat bags with a soft cellophane 'pish!'
This is what I was really looking for.  And I wouldn't let it go ever again.