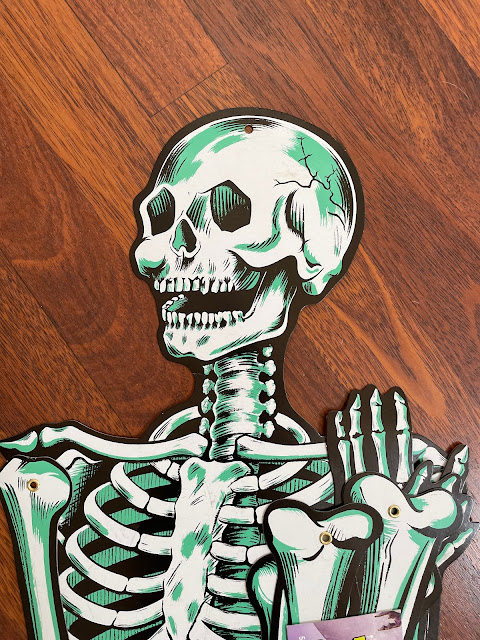 To me, Halloween isn't just a feeling in the air as the temperature begins to drop.  It's not just the smell of "Pumpkin Spice" and the petrichor of wet leaves.  And it's not just the taste of a fresh fall apple or the latest seasonal junk food stunt.  It's a nostalgic attachment to imagery and items that --when seen-- trigger a sense-memory to a time of youth, excitement and exuberance.

Halloween decorations fall into the latter and, to some, these things may just be pieces of cardboard or plastic.  Disposable.  Temporary and signifying nothing. To me however, there are certain Halloween decorations I have a strong connection with and the Beistle Jointed Skeleton is one of them.
My green-tinted Beistle Jointed Skeleton WAS Halloween.  In the same way that when the Christmas Tree went up in the house, instantly it felt like Christmas--- when that skeleton was hung on my bedroom door, I knew it was time for candy, costumes, and leaves.  It felt like HALLOWEEN.
In October, when I came home from school, and threw my book-bag in the corner of my room, I would run down the hall to be greeted by that smiling, empty-eyed sentry that came to represent all things Halloween to me.

I remember it distinctly: the green tinge to the bones; the fact that he was two-sided:  a glossy side and a matte side (glossy side was always facing out).  Because the skeleton was posable, I would constantly adjust his arms to look less "dancy" and more "menacing"--- at least as menacing as you can make a jointed skeleton look in two-dimensions.  I didn't want it to look like he had his hands on his hips in a scolding "Where have YOU been all day?!" look.  Nobody likes a nagging skeleton.
No it was crucial to have the hands and arms in a pose that almost looked like he would leap off the wall, and try and chase me with outstretched limbs.

That childhood Beistle skeleton remained in my parents' basement the other 11 months of the year, but I would visit him often, down there.  I'd take him down off the shelf, blow any dust off him, and make sure the Christmas decoration boxes didn't squish him.

Somewhere along the line (and I'm convinced it was the Great Spring Cleaning of '87) Mr. Skeleton disappeared.  I didn't make this discovery right away.  It was only on October 1st when I went looking for him that his disappearance was made clear.  My mother had no memory of his whereabouts and with each successive year, I wished I had that very skeleton back on my door to celebrate Halloween with me again.

Now at this point in the story you'll say:  well why didn't you just go buy another?
I half-heartedly tried to find a similar one while window shopping during the season, but I always seemed to find a different version:  an older version that was white bones, with an evil smile, or a newer version that was more brown with more of a cartoony style.
With internet shopping, everything is at our fingertips now, and with a few clicks and keystrokes we can order just about anything and have it brought right to our front door.
But I enjoy the hunt.
So I swore that unless I found the skeleton in an actual brick-and-mortar store, I would not purchase it.
To me, Halloween decorations are like adopting an animal at a shelter:  you can't pick them, they have to pick YOU.
About 10 years ago, I got lucky...
I was in Los Angeles in October 2011 and wandered into one of the few Ma & Pa party supply shops left in the city:  Vine American Party Store on Melrose Ave.  It wasn't hard for them to get me in the door, they had all manner of inflatable Halloween decorations on the sidewalk and two huge display windows decorated to the hilt with Halloween merchandise.
I wandered in and perused the shelves of masks, decorations, bags and more.  There was a bit of a randomness to the place-- a good sign that treasures await:  old wood shelves, peg boards, metal shelving, stacks of things in corners.
Up the wooden stairs I went ("Hey they have creaky old stairs in the store!") and found a little, less-traveled corner with many a dusty-but-unfaded cardboard jack o' lantern.
And then I saw it. 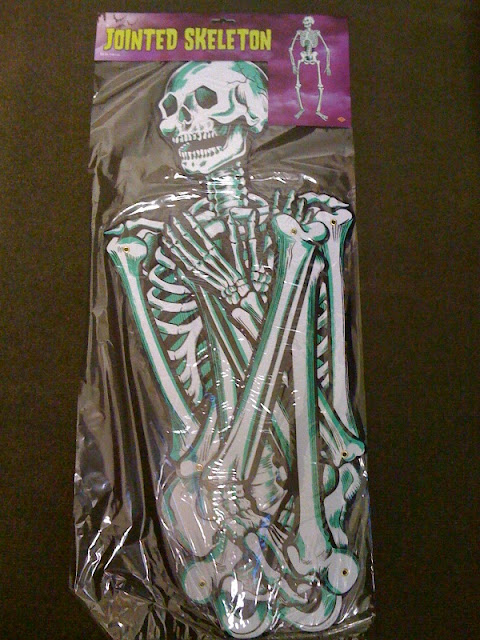 It hung in its pristine, unopened packaging.  Face smiling out at me.
I carefully removed it from its metal peg, hands shaking with excitement, and flipped it over.
There was the smiling face again.
TWO SIDED!  This was the one!

I thought about buying the remaining five on the peg, just to have back-ups but thought better of it.
It looked vintage.
It looked perfect.
Most of all:  it looked like MY Mr. Skeleton.
The price tag?
Two dollars and fifty cents.
A steal.
Trying to remain calm, I took a deep breath and widened my tunnel-vision to take in the other treasures that were within arm's reach.

I was immediately drawn to a package of very '70s-looking glow-in-the-dark Beistle ghosts, which I vaguely remember tacked to my 3rd grade bulletin board.
I took my treasures to the counter, beaming like I'd won the lottery.

The woman at the counter struck up a conversation about how great the vintage Beistle decorations are.
She went on to say that they had a few more cases in the back and they put out some every year, but "people these days tend to go for the blood and guts more than the older decorations."
"Not me." I said.
And, frankly, I'm not alone.  In 2021, Creepy Company sells the same Beistle skeleton print as blankets, socks, and more.  So this skeleton means something to many. 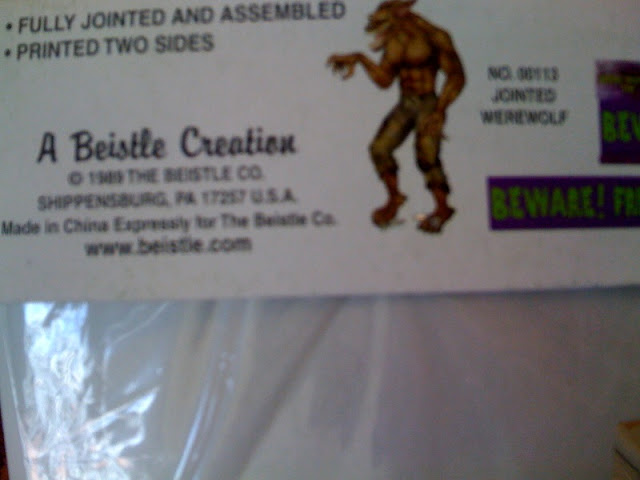 When I got home, I carefully removed him from his plastic sleeve.
As a kid, I only got to enjoy the skeleton already open and hanging on the door.
As an adult, I wanted to keep everything intact as long as possible, and take in every moment of the experience.  I perused the script of the Beistle logo.  I enjoyed the mini-ad for the Beistle jointed werewolf on the back of the tag. 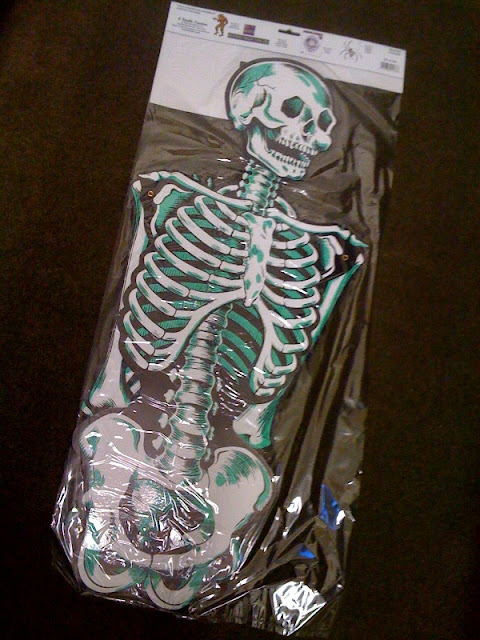 I flipped him over and over.  Carefully deciding if I wanted him to be matte or shiny.  It was a tough choice as to choose one glossiness over another meant committing to the skeleton looking one direction or the other.  Going from my memory and, in effect sticking to tradition, I went with the skeleton looking to the right (glossy). 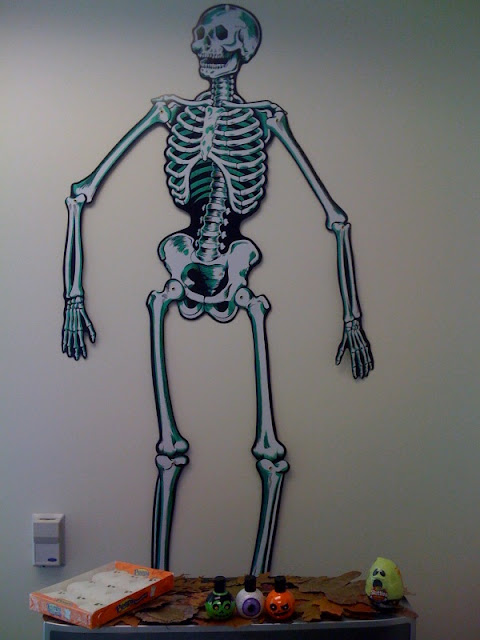 As you can see, he's glorious.
I had my choice of size while in the store and went with the largest they had:  55 inches.  Once home and mounted on the wall I realized that I had picked the size proportional to myself.  As a kid, my parents had purchased the 22 inch version and, compared to me as a kid, the skeleton seemed huge.  As an adult, the corresponding 4 foot 7 inches version I bought gave me the same feeling at a much grander scale.

So came the end to my quest.  Achievement Unlocked.
And to this day, it's not really Halloween until Mr. Skeleton adorns my wall.
In thanks to Vine American, I would ask that should you ever be in the Los Angeles area, and have a zeal for Halloween decorations, be sure to find them in the month of October.  You won't be sorry.

Where are they?
Just inside...
Up the creaky wood stairs...
And into your heart.