For the 2018 Halloween Countdown, I'll be doing 31 posts for the month of October covering "Halloween Scenes."

As the oh-so-clever title may suggest, these are scenes from films that embody the Halloween-spirit even though the film itself is not a Halloween or Horror film.

Case in point:  the film American Splendor.
First, if you haven't seen it and are a fan of comic books, film, writing, creativity, the American Dream, unconventional storytelling and/or underdog stories--- you NEED to see this movie.  It's an autobiographical film of Pekar himself (played by Paul Giamatti) and his artistic ascent as a comic writer of the book American Splendor. 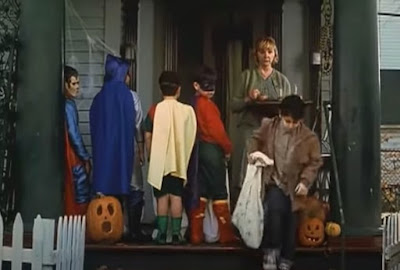 The Halloween Scene in American Splendor comes right at the beginning of the film as a very young Harvey attempts to trick or treat.  The scene has all the Halloween trimmings a sucker for Americana (like myself) asks for:  A mom answering the door holding a tray of caramel apples, a porch full of jack o' lanterns and spiderwebs, and kids wearing Ben Cooper / Collegeville plastic masked costumes of Batman, Robin and Superman.  You can see a truncated version of the full scene in the trailer HERE.