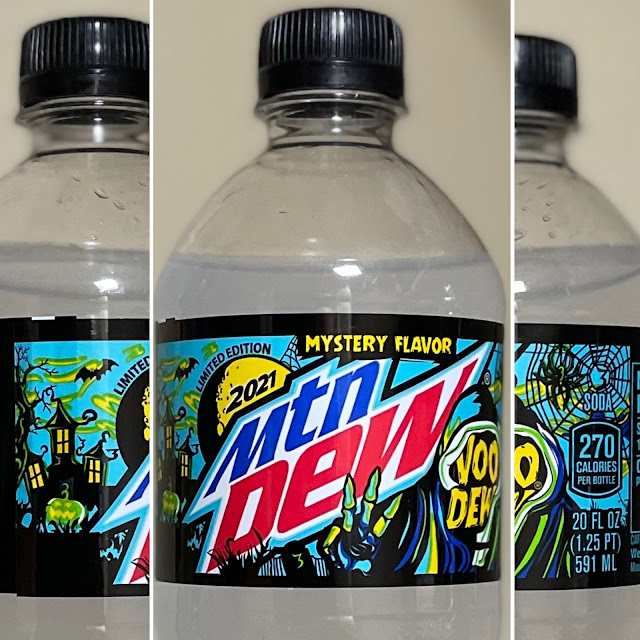 Well I have found, purchased, and consumed Mountain Dew's third incarnation of their Halloween-themed "mystery flavor" soda:  VooDew 3.  And I have my guess as to what flavor it is... 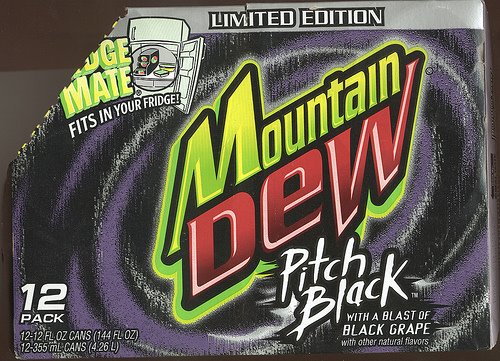 First, a little history:  Mountain Dew has been part of my Halloween season for over a decade.

It all started back in 2004 when I was perusing my local Target and found a display of a soda called "Mountain Dew Pitch Black." It was just a little floor tower in amongst the Halloween snacks aisle.  The boxes were in my favorite Halloween 'secondary color palette': dark monster purple, slime green, and blood red.  The title of the soda "Pitch Black" was written in what I can only call "hurried, danger-scrawl." And in fine print it said "with a blast of BLACK GRAPE."

It's presence in the Halloween aisle coupled with its color scheme and the words "LIMITED EDITION" across the top telegraphed to me that this was a Halloween soda. Good job advertisers. You targeted me. So I bought a box.  Up until that point in my life, I had always associated grape soda with summer, but this was different.

First of all, it was such a dark color (much darker than regular grape soda) that I imagined it bubbling in some skeleton-stirred cauldron at Mountain Dew headquarters.  The taste:  marvelous.  It was grape... but there was a citrus twist to it that made it unique.  And of course: this was a highly CAFFEINATED soda. There aren't too many of those on the market.  The next thing I knew, it had become my beverage of choice for the 2004 Halloween season.  It fueled the late nights as I built decorations for our annual Halloween bash and kept me up for Halloween horror movie marathons with friends.  I drank it as I drove around listening to spooky music and looking at yard displays.  It became my Halloween buddy.  Then the season ended... and it was gone.  "Limited Edition" indeed.  They weren't kidding.  As daylight savings time went into effect and we crept toward Thanksgiving and Christmas, I sincerely missed that soda and swore that next year I wouldn't just buy a couple 12 oz bottles and a 12 pack of cans.  I'd stock up.

A year later, when the 2005 Halloween season began to ramp up, I headed back to Target and eagerly sought my Halloween buddy (remember, this was before the Mountain Dew Locator website even existed).  This time it wasn't just a floor display.  It was stocked floor to ceiling in the soda aisle!  But oh wait --what was this?!  My normal Pitch Black had a different moniker:  Pitch Black II.  And it had a tag-line: "Back with a Sour Bite!" Sequels. Tag lines. This wasn't just a soda, it was a feature-length horror movie of a beverage!

There on the 12 pack box were those foreboding words again: "LIMITED EDITION."  Well, I had learned my lesson last year.  I bought 3 cases at that first sighting.  If I was out on the town, away from my refrigerated cans, I would by 12 oz. bottles.  Pitch Black II was not to leave my side in October.  We were Halloween buddies after all.  Just like in '04, it was my Halloween drink o' choice for 2005.  As for the new "sour bite" I liked it even better than Part I.  I'm not gonna lie:  I bought enough Pitch Black II to enjoy through December.  Gave it to friends at those same decoration-building meetings, and passed them around at the all-nighter horror-thon.  Then it was gone again.  I drank that last can like I was appreciating a fine wine on the deck of the Titanic.  It was a bittersweet moment, but I knew it'd be back next year.  Right?

The next year, I knew something was wrong when it was in the second week of October 2006 and Pitch Black III was nowhere to be found.  I felt like Linus calling after Sally.  "It won't be long now!  You'll see!"  I searched the internet.  Surely there MUST be a 2006 version out...

Thanks to Matt's pre-Dinosaur Dracula website, I found out that though the soda hadn't returned, there was an Icee version called "Pitch Black Freeze."  I went back to my Target and sure enough, there it was over by the microwaved pretzels and greasy pizza squares.  I poured.  I sampled.  Ahhhhhhhhhh there was my old friend again.  I walked around Target, looking at Halloween paraphernalia and enjoying the sense-memory the grape flavor and caffeine burst was providing.  This time, it felt like it was going to be the last.  There was no "III" on the display and being banished to the corner of the Target seemed like one foot out the door.  That day felt like lunch with an old college friend:  it felt good to see them again, but you knew it would be the last time.

And it was.  THIRTEEN years passed without a Halloween Mountain Dew.  Or ANY Halloween soda for that matter.  Jones put out some versions, and the 7ups and Coca-Colas of the world re-branded some of their products, but it wasn't the same.  There wasn't that THEATRICALITY.

Pitch Black came back in 2016 with their DEWcision stunt.  But that was in the middle of Spring, and without the spooky-season PUSH--Pitch Black, though delicious, lacked MYSTIQUE.  It was a recipe for fun that was missing:  having a soda only be available in the Fall + scary marketing = Halloween fun.  Halloween certainly had a hole to fill.  It had lost its mascot beverage.

Two years ago, Mountain Dew released VooDEW.  The spooky-named soda was a cloudy, non-color of a drink.  The label was slathered in Halloween colors, deep purple and bright orange, yellow, and white with a shrouded figure with skeletal hands on the front.  Best of all:  the flavor was a MYSTERY.  Mountain Dew had brought back the Halloween mystique!  There were clues!  There was a mystery to solve!  We all had to guess the secret flavor before it was revealed on, you guessed it, HALLOWEEN.  VooDEW was FUN.  It had elements of a game:  you had to find where it was being sold!  You had to guess the secret flavor.  And who was that spooky spectre on the bottle?  The Grim Reaper of soda?  The Dementor of caffeine?

The taste left lots of room for conjecture.  Personally, I thought it tasted like an orange creamsicle, which was lovely, but didn't seem very Halloweeny to me.  But that didn't stop me from scrolling through Twitter and Instagram seeing what others thought.  Someone pointed out that the color scheme and the clues were  pointing to candy corn.  I tried a second and then a third bottle--- and I was NOT getting candy corn.  But again-- it didn't matter.  It was fun!  (SPOILER ALERT:  It WAS candy corn.) 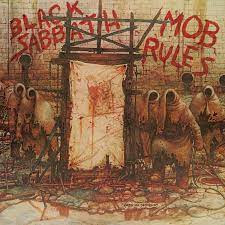 The soda helped shape my Halloween season!  I couldn't help but put Black Sabbath's "Voodoo" on my Halloween music mix that year.  I watched Wes Craven's The Serpent and the Rainbow (which has a voodoo-laced plot) as part of my horror movie marathon.  It was more than a soda, it was a theme! 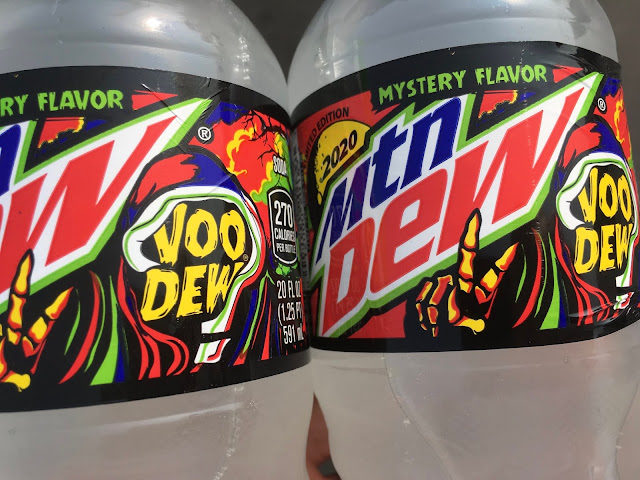 2020:  The COVID pandemic had the world closed, and Halloween cancelled, so the arrival of VooDEW 2 on store shelves in October was a familiar and welcome diversion.  The hunt was on again, but this time I didn't have to go far:  luckily the convenience store within walking distance of my bubble had some in stock.  All of us VooDEW consumers knew the rules of this soda-horror-movie this time:  we knew how to analyze the colors, we knew to consult with each other on the socials, and the distraction from the stresses of 2020 was enjoyed by all.

The colors were different:  the orange and purple was replaced with red, blue, yellow, green, orange... all the colors of the rainbow.  There was consistency too:  our shrouded skeletal friend was back and this time flashing two fingers to signal the sequel.  Or was he wishing for peace on earth?  I accepted both possibilities.  This time I knew to analyze the flavor through a filter of Mountain Dew-citrus (it was my only guess as to how the first VooDew could have been deemed "candy corn").

My guess for VooDew2 was 'candy-apple' (not to be confused with caramel-apple).  But I still didn't nail it.  SPOILER ALERT:  VooDew 2's official flavor was "Candy Explosion" a completely un-guessable name, in my opinion.

But guessing the flavor of this Halloween beverage is not about solving the mystery. 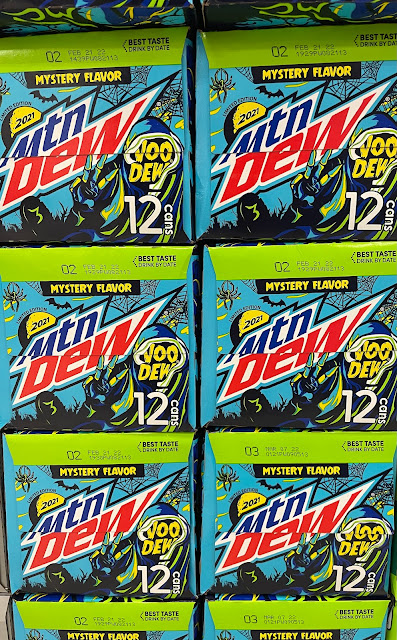 Now it's 2021, and VooDEW 3 has arrived.  It actually got here a month or so ago.  Plenty of time to surmise.  I'm delighted.  I love hunting down the bottles.  This year, I found them in the little coolers in front of the check-out lines in an out-of-state Target.  Our Spectre of Soda is back again, this time in shades of cool blues and flashing three fingers.

I'm glad that Mountain Dew did this beverage trilogy for us all.  I'd like for VooDEW to become a Halloween tradition:  a fizzy Great Pumpkin or a caffeinated Treehouse of Horror.  I hope that they continue to crank these out at Halloween and that our shrouded friend holds up at least seven more fingers before being joined by a new creature.  If not VooDEW then at least a new Halloween beverage every year.   Because It matters.  It's important.

I don't really think it tastes like peanut butter.  I think it tastes like pineapple.  If I analyze the flavor through Mountain Dew goggles, I'd make an educated guess that it's "bubble gum."  But as 2020's 'candy explosion' taught us, it's a fool's errand.  It doesn't matter what the flavor is.  These Halloween stunt beverages are important because they remind us of the past.  They help us celebrate the present.  They keep us wanting something for the future.  They motivate us.  They cause us to interact.  To communicate.  To seek.  To inspire.