Personal Stories: That Time I Had a Giant Alien Costume in My Living Room 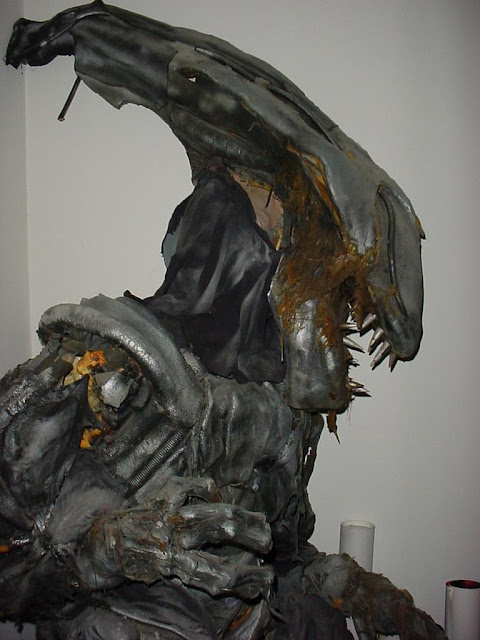 Did I ever tell you about the time I had a giant, life-size, ALIEN prop costume in my living room?

Way back in 1998, I had a friend who was creating a game show pilot for the Sci-Fi (pre-Sy-Fy) Channel.  The pilot was called Dr. Brainiak's Lab and the plot of the show was something along the lines of a fired TV network research scientist builds a secret underground lab beneath the very network that fired him so he can tap into the network feed and beam his bizarre gameshow experiments into all homes.  Something like that.  There were puppets.  There was an opening song.  It was crazy, but fun.  The elevator pitch would be:  what if Svengoolie dressed like Dr. Emmett Brown and hosted a gameshow with science-fiction-themed trivia questions and physical challenges a la Nickelodeon's Double Dare, with a dash of Halloween 3:  Season of the Witch.  It had the production value of early MST3K episodes, with lots of homemade props or off-the-shelf tweaked items that, presumably, the mad scientist had scavenged to build his lair.

The prop master brought in a bunch of stuff to decorate the set that he had used on past productions, one of which was a life-sized costume that was made to look like an H.R. Geiger-esque ALIEN.  Built from foam, plastic tubing, fabric, latex, and wood, the costume was originally designed to be worn.

Built on top of an American football kit: the head was fastened to a helmet...

...the chest and back were glued to the shoulder pads... 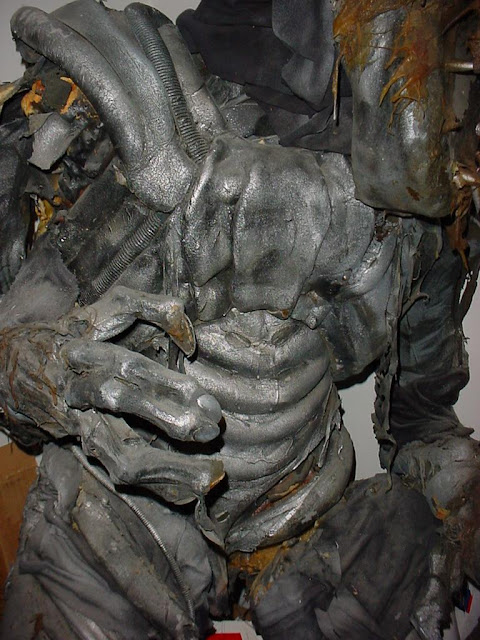 ... with the legs, tail and feet attached to pants and shoes. 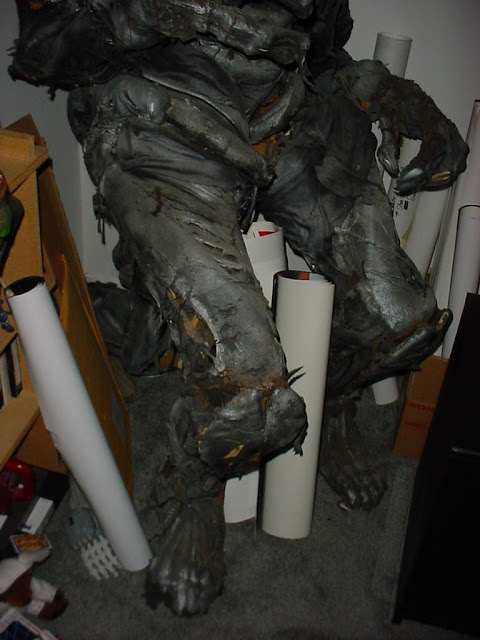 An ingenious design, it had actually appeared in a Polaroid TV commercial originally (the Alien fought some Starlight Express-looking space dudes... or something).  The only proof I have of such a thing is a page out of an old Producer's Handbook where it was used as an example of make-up effects work (see pic).

After the commercial, to help keep its shape, the prop master filled the entire thing with spray foam insulation, and mounted it to a stand. 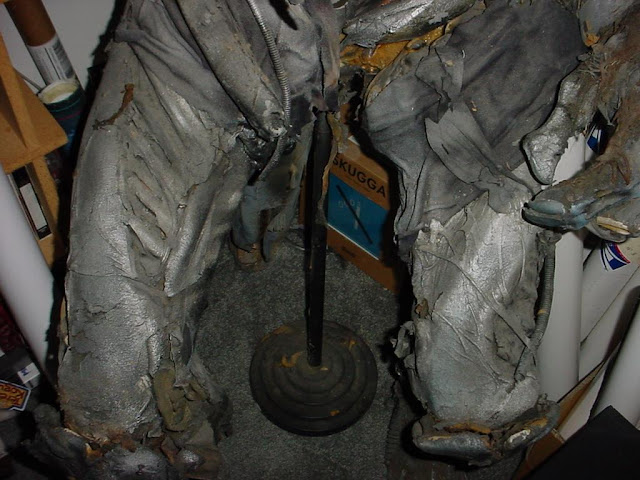 So when this prop master was hired to flesh out the set of a science-fiction-themed game show with weird knick-knacks, he brought along the Alien.  You can see it in these pulled-from-VHS screen grabs, poking through the wall of the set, clutching a Frisbee. 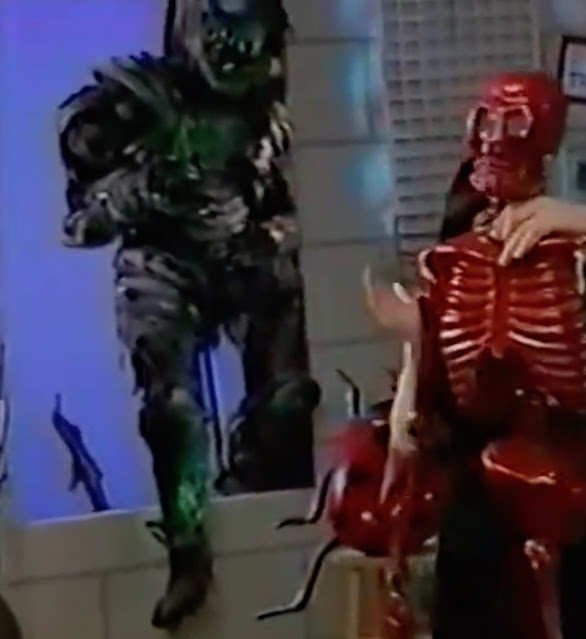 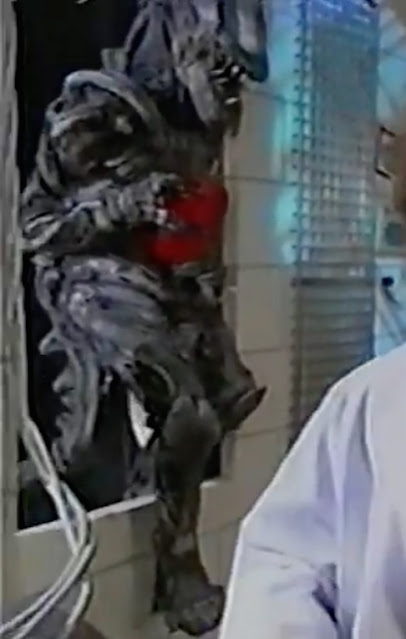 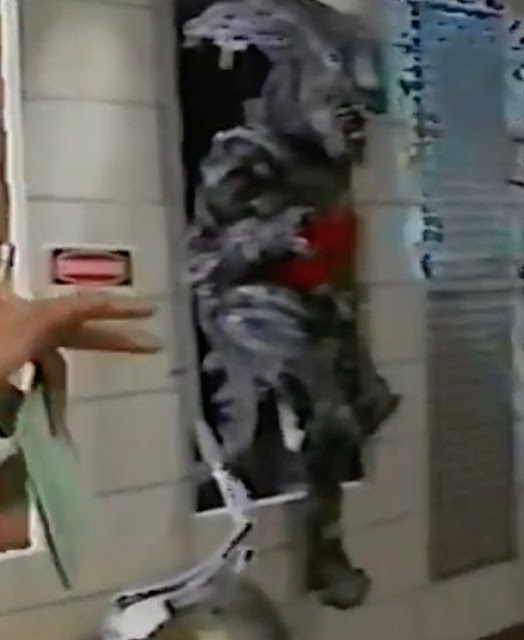 When the pilot wrapped, and the set was being broken down, myself and my friend--- who were enamored with the thing-- noticed the statue wasn't being loaded into the prop master's truck.  I asked "Hey where's the Alien?" and he responded "Gone.  I tossed it in the trash."
"THE TRASH?!" I blurted.
"Yeah, it's pretty beat up and I don't want to haul it back."

Seeing my crestfallen, shocked, face he followed with "Do you want it?"

My friend and I climbed into the dumpster, and hauled out a very big, very heavy, full size Alien costume.  We managed to squeeze it into his station wagon, and drove it to its new home:  my two-bedroom apartment.

'One man's trash is another man's treasure,' goes the saying.

'Be careful what you wish for, you just might get it,' goes another. 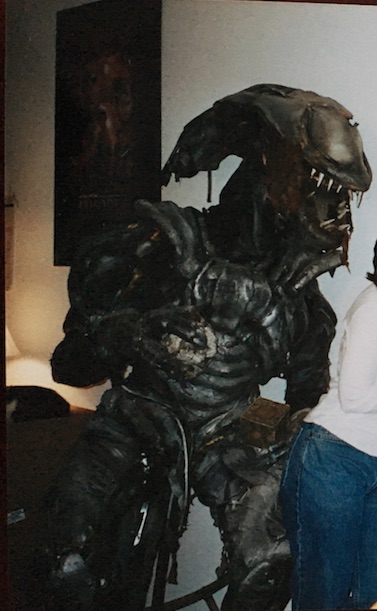 For geeks, it was a wonderful conversation piece.  When friends came over and spotted it looming in the corner, they would wander over slowly, wide-eyed, and say something along the lines of "Whaaaat is THAAAT?"  The Alien was a cross between a beloved pet and a piece of furniture--- often dressed up for holidays:  Santa's cap for Christmas, orange pumpkin lights wrapped around it for Halloween.

Everyone wasn't thrilled.  There was the time a family friend flew in for a visit and refused to sleep in the same room with it.  I slept on the pull-out couch that night.  Eh---sacrifices.

There were some downsides.  It was HEAVY.  Moving it involved doing a deadweight fireman's carry over to a new corner.  It HAD to be in corners of rooms, because time was not being kind, and its own weight was causing it to sag like a sleeping drunk at the Mos Eisley cantina.

The Alien lived in my apartment for about 5 years-- 'til 2003, and then came the time when I was getting ready to move and had to come to terms with the bitter truth:  I couldn't take the Alien with me.  I had purged a lot of the memorabilia and geekery in my spare bedroom that served as a storeroom:  VHS tapes, movie posters, masks, action figures, but I couldn't bring myself to just toss the Alien back into a dumpster from which it came.  When one becomes the custodian of a prop, one must accept the responsibilities that come with that prop.  I had to find it a home.

At the time, the only place to sell things on a wide scale was eBay.  I knew shipping the item would have been too cost prohibitive, so I posted with many notes for local pick-up only.

Weeks went by without a bite.  The end of September was coming, and I needed to be out by the end of the month.  I was almost out of time... with no Plan B.

Then--- a Halloween miracle.  I received an e-mail from the San Diego Boys and Girls Club.

They were working on their 2nd Annual Haunted House and wanted to know if I would donate the Alien to the Club (they would provide a tax deductible receipt, of course).  When the truck pulled up that weekend, I almost had a tear in my eye.  Alien and I had been through a lot together.  But it was time for him to move on.  When the guy saw the Alien for the first time, he lit up.  "Oh YEAH!  That's GREAT.  The kids are gonna love this!  This is going to be so great in the maze!" 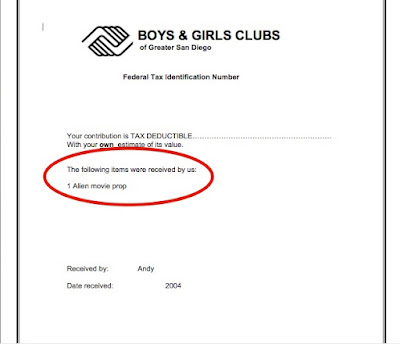 As the truck drove away with the Alien in the back, I smiled.  Knowing his final outing would be bringing screams of fear and delight to the kids of San Diego, seemed right.