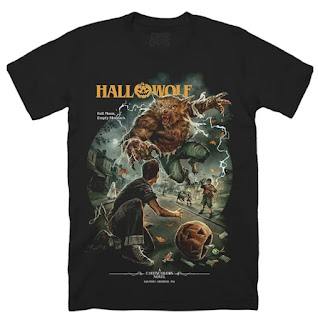 I decided to try something different for my personal Halloween festivities this year.  I decided to have a "theme"...

It started off innocently enough.  I made a list.  I.  LOVE.  LISTS.  Especially at Halloween time.  I love reading lists of horror movies; lists of haunted houses to visit; lists of Halloween candies, etc.  Love it.

This year I had the thought, "Y'know I really like werewolf movies, but I never seem to make time to watch them."  So I started writing down all the werewolf movies that I wanted to see.  There were new ones I had seen trailers for like Werewolves Within and The Wolf of Snow Hollow.  There were classics I've never seen like Universal's original The Wolfman, and Hammer's The Curse of the Werewolf.  There were goofy ones like I Was a Teenage Werewolf and Werewolves on Wheels.  Weird ones like Wolfcop and Werewolf Ninja Philosopher.

Next thing I knew, I had quite a list.

So then I thought "Well I'll just watch 31 werewolf movies for Halloween this year."

The only hurdle I saw was that, unlike when I was in my 20's... I don't have the time to watch a movie a night.  I'm an adult with adult things.  Adult responsibilities.  I'm Adulting HARD these days.

And to be perfectly honest, if it gets too late, I nod off.

So I did.  Despite my unofficial rule of keeping my black & orange festivities contained to October, I started watching back in September.  Right after Labor Day actually.  Whenever I had time I'd put one on.  Lunch break.  After dinner.  In the morning before work.  It took off some of the pressure.

Unlike a lot of the '31 Days of Horror' challenges I see on the interwebs, I'm not sticking to a specific film per day. I've got way over 31, so I just scan the list and put on what I'm feeling that day.

Once I had the theme, I started finding connections to it.

One of my Halloween traditions is to take in an old TV Halloween episode.  In my werewolf movie searches I somehow stumbled on to a Barney Miller episode from Season 3 (Episode 6) called "Werewolf" (originally aired October 8, 1976).  Perfect! 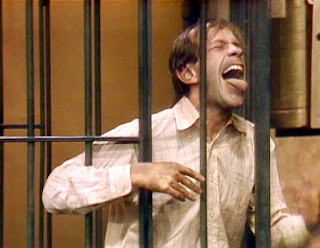 Then when Cavity Colors announced their SpookBag this year, low-and-behold the artwork was Halloween AND werewolf related and called HALLOWOLF.

PERFECT.  Now I had a NAME for my little personal challenge--and an official outfit!  (Oh, I managed to purchase a SpookBag.  First.  Time.  Ever.  Can't wait.)

Now whenever I flip through Twitter, or Instagram, I can't help but see the werewolves when they pop up.

Hey look, there's a headline about how Build-a-Bear is sold out of their Howl-o-Ween werewolf!

Hey look, Spirit Halloween is selling vintage plastic masks---and there's a werewolf one!
LOOK!  PixelElixir is including an exclusive Halloween werewolf sticker in their treat bags!
HEY LOOK!  I just got an alert that Archie Comics' Jughead: The Hunger volumes are on sale!
And on and on and on.
I know, the argument can be made:  am I just seeing werewolves where they would always be?
If I had chosen mummies, would I be exclaiming "Hey there're mummies everywhere!"
Maybe.
Probably.
Maybe-probably.
Oh and here's that list in no particular order that I mentioned.  Before anyone sounds off in the comments, I have recently watched Wolfen, Goosebumps 1 & 2, and Dog Soldiers and didn't feel like watching them again.  Anything with a check mark I've already watched.
This by no means is meant to be a comprehensive list, nor a best-of list.
It's just a list of werewolf movies that I'm watching this year.  Some I've seen.  Some I've always wanted to see--good or bad.
That said, if you'd like to recommend something please do.  :)

☐ Making of Thriller and the music video, YouTube

☐ The Rats are Coming the Werewolves are Here, Rent .99¢ Amz

☐ The Curse of the Werewolf (Hammer), Rent

☐ I Was a Teenage Werewolf, YT

︎ An American Werewolf in London

☐ House of the Wolfman, YT

☐ Harry Potter and the Prisoner of Azkaban, HBO

I think it's important to do something different every Halloween season.  I had this realization when, three years in a row, I essentially did the same 'traditions' that I'd always done.  Watched this movie, ate that snack, went to that park.  When I thought back on those years, I couldn't tell them apart.  I couldn't remember which year was which. So--- I made the decision right there and then to do some major different thing every year.  Now when I think back on Halloween seasons, I can remember:  oh that was the Knott's Scary Farm year.  Oh that was the year we held the party that a thousand people showed up to.  Oh that was the year we stayed home during a global pandemic.  You get the idea.

This is the year of werewolves.

Beware the moon.  Stick to the roads.