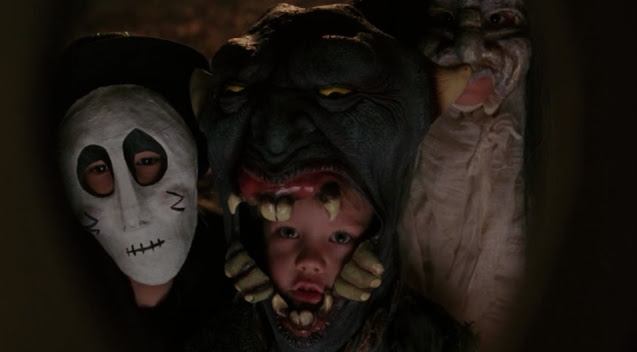 Batman Forever is known for many things:  Jim Carrey in his prime; the beginning of the end for the '90s Batman franchise; and Val Kilmer as a blonde (BLONDE?!) Batman.
But what many forget is that this film has a nugget of fun called a HALLOWEEN SCENE!
In fact, one could say that Halloween is to blame for the Bat Cave being destroyed in Batman Forever.

'Tis true.  Occurring about an hour and a half into Batman Forever, Halloween is actually used as a plot point allowing Tommy Lee Jones and Jim Carrey to break in to Wayne Manor and the Bat Cave.

I have to give credit where credit is due:  some creative costumes are used.  I guess I can thank Tim Burton who was Producing.  One kid wears a troll-like ogre mask that makes it look like the child is trying to climb out of the mouth of his devourer (see 1st pic).  There's a gargoyle-inspired gray thing (on the right) and a generic, white-faced mask-- think Rise of Leslie Vernon with a Tim Burton twist. 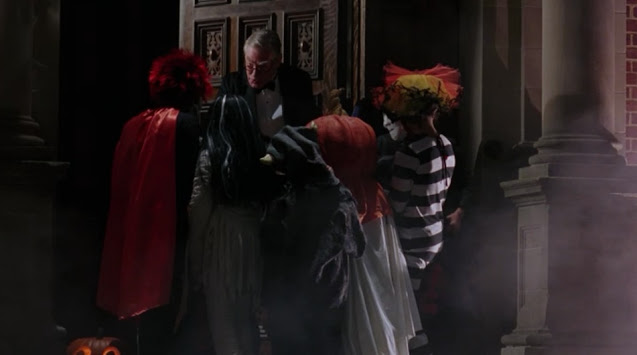 Alfred gives the candy to the kids and offers some creepy advice, "And don't eat too much tonight... or you'll be sick... in your beds."  He says it with such psychotic glee that if I were to see this clip out of context I might think it was an alternate universe sequel to a certain segment of the film Trick 'r Treat.  Think about it, you know which one I'm talking about. 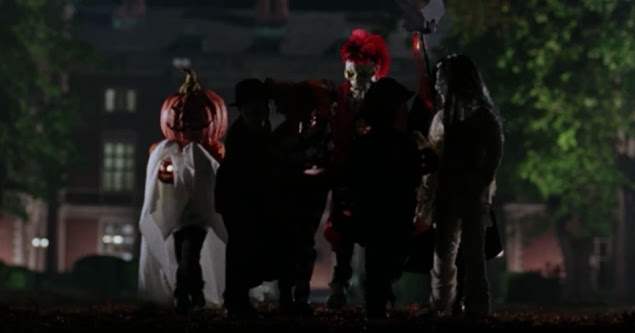 As the kids leave Wayne Manor, we get a better look at the other two kids at the door who were obscured by the low-peripheral of the peep hole.  There's a giant jack o' lantern headed thing (which I can't help but think looks a little like something out of one of the Flatliners nightmares, also by Schumacher), and a skeleton faced punk.  (Click the pic to see it bigger.) 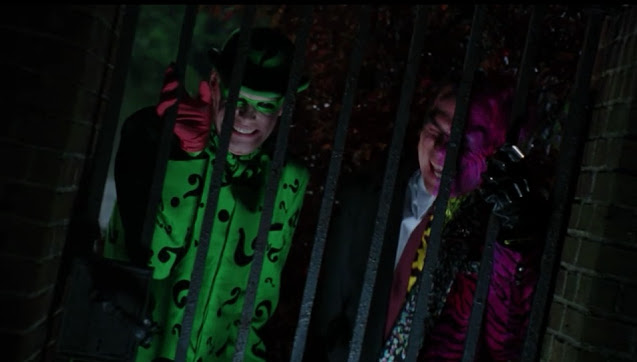 As the treaters flee from creepy Alfred, the camera swings over to our day-glo villains Purple and Green----er, Two-Face and The Riddler... who giggle to themselves and say aloud "Happy Halloweeeeen!"  Awww... see that?  Halloween. 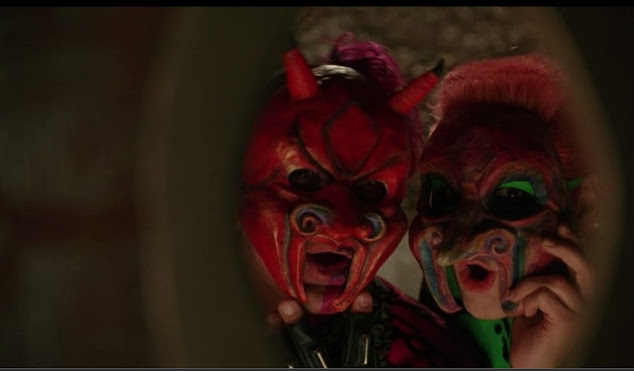 The next shot has the rogues gallery knocking on the front door wearing Greek-Theatre-inspired masks and use the classic Halloween "gimme candy" phrase in an Elmer-Fudd-eque tone:  "Twick or Tweeeeeeet!" 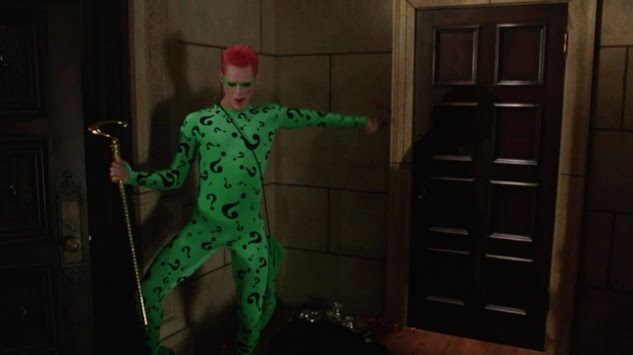 Alfred unsuspectingly opens the door and is belted with The Riddler's cane, knocking him out.  The Riddler slides in the door first and Carrey does his best Jim Carrey over enunciating "TRICK!"-- delivering on that promise that most trick or treaters usually forget:  if you don't get a treat then you face the trick.  Go to Def Con 1.  Threat level is high.

That's pretty much the end of the Halloween part of the scene.
The bad guys get in.
Kilmer and Kidman run away.
It might be worth noting that Bruce has a lovely fall spread on the dining room table.  A couple large pumpkins (which bounce like a Raiders of the Lost Ark temple stone when they're knocked over, so look for that piece of fun).  See?  Halloween in Batman.
I make a few jabs at Batman Forever, but I'll be the first to admit:  I went as the Jim Carrey Riddler for Halloween that year.  Yep.  I did.