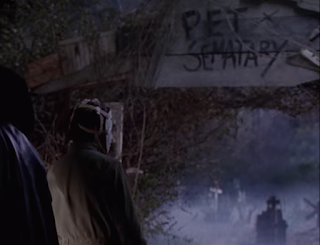 The kids of Pet Sematary 2 (by the way... do you know how hard it is to continually MISSPELL "cemetery") seem to be allowed to go out trick or treating all night long on Halloween in the small New England town.  Main street has handfuls of kids going door to door, with small jack o' lanterns lit in windowsills, and those orange pumpkin leaf bags stacked on the curb. 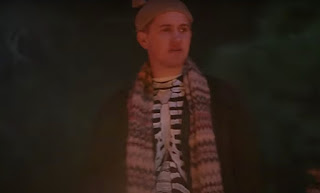 I have to assume that after getting sugared-up, they know to head out to the pet cemetery where there will be campfires and ghost stories.  Well murder stories really, told by the bad kid who wears a stocking mask, but a skeleton t-shirt.  Bullies, man.  Always givin' skeleton costumes a bad rap.  See also:  The Karate Kid.

The bullies' costumes overall have an air of "half-assed creepy."  There's the aforementioned stocking-faced skeleton; there's 'bloody bandaged guy' (who I could say is maybe going for a Darkman or Dead and Buried vibe?); a crazy haired kid who either bought a Don King wig, or messed up his Beetlejuice Otho); a creepy old man mask (you've seen it before); and a weird gill-man.  I guess if you plan on partying in the woods, screen accuracy isn't at the forefront of your mind. 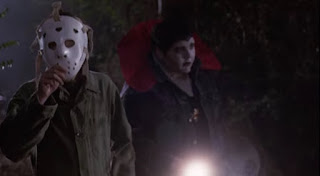 But John Connor and friend show up dressed as not-Jason-Voorhees and Dracula where they get scared by a dummy (the ol' throw the dummy at your friend trick).  Then things REALLY get crazy.  There's a zombie dog, an abusive cop who becomes a zombie cop, a spooky tree. 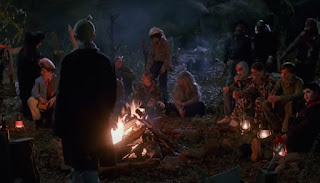 Between the small New England town, the campfire, costumes, graveyard, gore, and mayhem, this Halloween scene has a lot going on and definitely gives the cold-autumn-night feels...