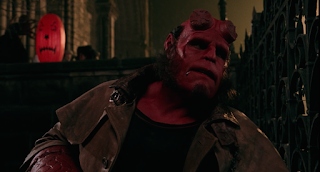 Guillermo del Toro's cinematic ode to Mike Mignola's classic comic, Hellboy contains a brief but consequential Halloween scene.
When you're a 7 foot tall bright red demon, who files down the horns on his head, there's really only one night a year you can walk around without getting strange looks:  Halloween.
After a particularly tough battle with a self-replicating creature, Hellboy hangs around outside and above ground long enough to swipe a six-pack of Bud Light from an unsuspecting clown (literally) who has left the carnival-like atmosphere of a Halloween night to make-out.   Children run by in costumes ranging from angels, to cowboys, to jesters, while orange plastic jack o' lantern string lights blaze above.  It's all enough hub-bub to allow Hellboy to pilfer the beer with his tail and head to Bellamie Hospital to swoon over his on-again/off-again girlfriend Liz. 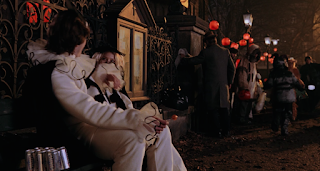