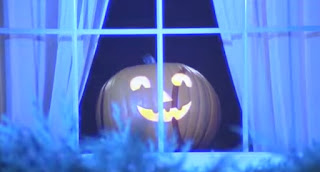 I hesitate to even call this a "Halloween Scene"--- it's really just a jack o' lantern in a window.

But in this case, it's an accumulation:  a sum total of spooky things that bumps this one to Halloween Scene status. 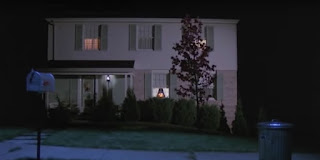 The opening shot is of a suburban house at night with a lit jack o' lantern in the window.  There's no mention of Halloween in the rest of the film.  No other decorations, no other scenes, no other mentions.

But Creepshow is a horror/comedy anthology film directed by George Romero with a screenplay by Stephen King.  Take one of the most influential horror directors of all time and pair him with one of the most prolific and popular horror writers of all time, and have them collaborate on a love letter to E.C. Comics titles like "Tales from the Crypt." That alone is enough to push this into noteworthy Halloween Scene territory. 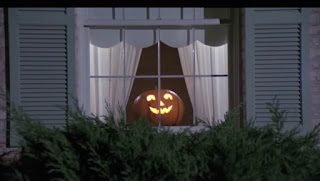 But there's more-- as the camera cuts closer and closer to the pumpkin in the window, we hear a father berating his son about not reading horror comics (I'm simplifying).  That father?  Tom Atkins (of Halloween III: Season of the Witch, Night of the Creeps, The Fog, etc. etc. TOM FREAKING ATKINS!).  That son?  Well none other than Stephen King himself's son:  Joe King.  You may know him by his nom de plume Joe Hill.  -ahem- He's written a few things...). 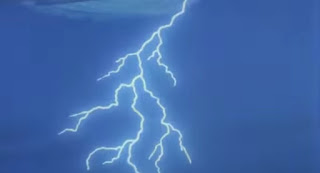 The opening scene then fades into animated titles full
of lightning, scary fonts, screaming faces, scary claws, and Beistle-like skulls.  This opening is so full of Halloween goodness that it should be played on a loop at Halloween parties.

Clocking in at just under 4 minutes, this is a perfect example of a Halloween scene that does so much in so little time. And you've still got a whole horror movie anthology to go... 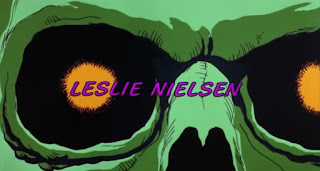 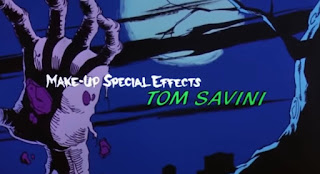 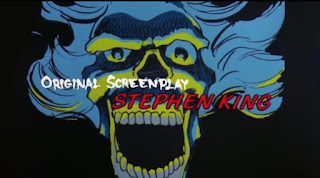