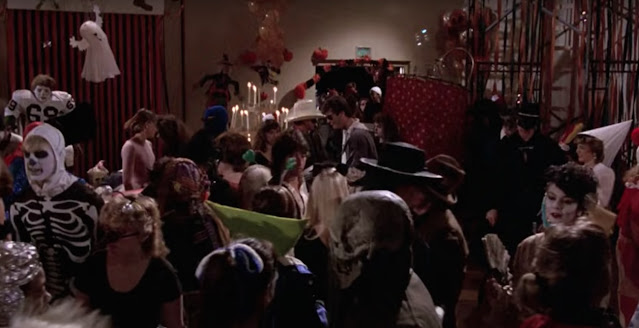 Like E.T., The Karate Kid has one of the best Halloween Scenes:  integral to the plot, chock full of Halloween spirit, and creative costumes galore.

What was it about '80s films that really nailed Halloween?  Costumers and Set Decorators seemed to have a ball.  The opening shot features a cavalcade of costumes:  a cowboy, masked superhero, Zorro, zombie football player, skeleton, alien, and --for fans of Halloween III: Season of the Witch-- a Don Post skull mask in the foreground.  Not to mention black and orange streamers, cardboard cutouts of scarecrows, cats and skeletons, and a crepe paper ghost hanging from the ceiling.

In The Karate Kid, Ralph Macchio's "Daniel" shows up to the Halloween dance dressed as--- a shower.  It was an ingenious design involving a circular polka-dot curtain that can be pulled all the way around, with a shower head poking out the top, tinsel dangling to simulate water.

The costume allows him to attend relatively unnoticed, slipping right past Johnny's (William Zabka) minions (the "bad guys") who are dressed appropriately as skeletons (the bad guys are always skeletons... see also Pet Sematary 2).  Daniel's love interest, Ali (Elisabeth Shue), spots him right away and enters the shower to flirt a bit and plant the seed of an idea that she wishes Johnny would 'get a dose of his own medicine.' 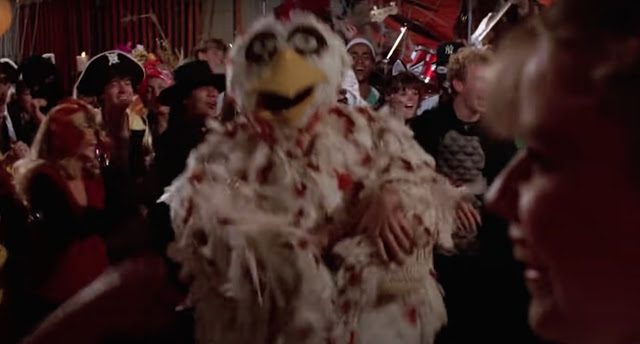 Interrupting their moment is someone in a chicken costume, who's crushing real eggs on partygoers heads.  We get to see a different angle on the dance, with a pirate, a Zorro, a Carmen Miranda, and a caveman on screen.  What's amazing to me, is that no one really seems MAD about the eggs.  Including Daniel who takes an egg to the head with a smile on his face even though it forces him to go clean up in the bathroom. 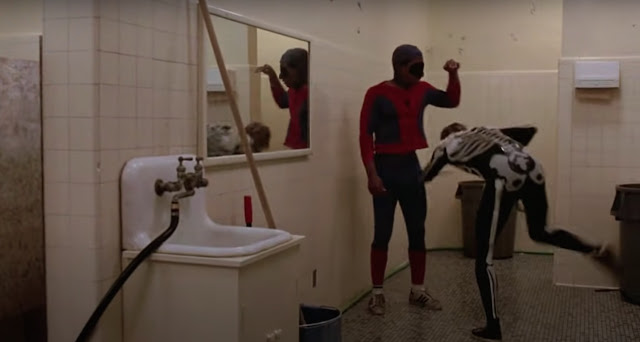 In the men's room, Daniel manages to rig a hose to spray on Johnny while he sits in a stall. Johnny runs out after him, almost colliding with a maskless, high-fiving Spider-Man. 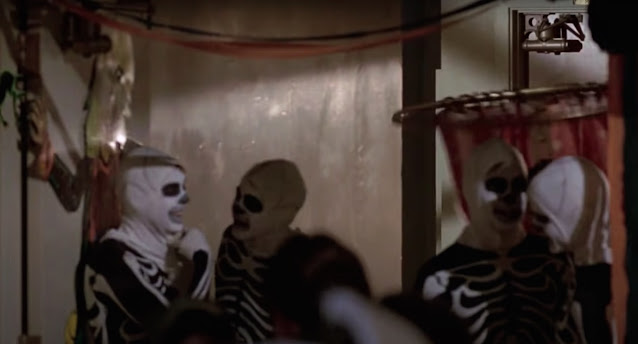 Daniel plows through Johnny's skeleton crew and heads outside.  There we get to see a devil, a clown, a hooded reaper, a 'safari-guy', a striped prisoner, and a cardboard skeleton tacked to the door.
Lots of great Halloween stuff to oogle at, and the Don Post skull mask is a fun easter egg for horror movie lovers. 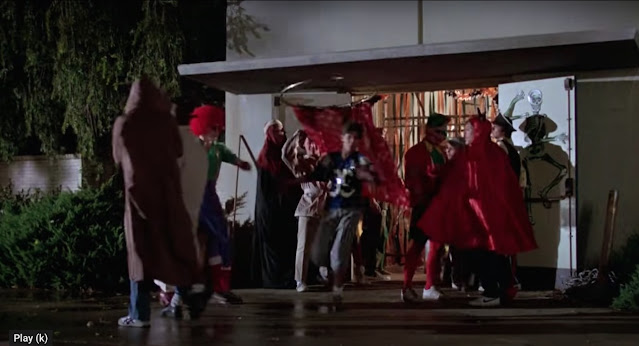