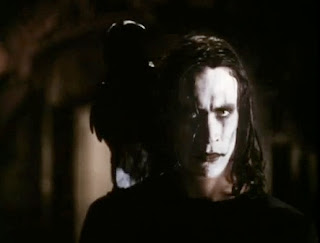 Here's a Halloween Scene from one of my favorite movies.
If you haven't seen The Crow (the original with Brandon Lee, not the sequels that do not have Brandon Lee... and are not good...), let me give you a quick rundown of the film...

Eric Draven is happy musician.  He's engaged to a lovely woman, Shelley.
On the eve of their wedding night (October 30th) both are murdered.
On the one year anniversary of their deaths, Eric rises from the grave to enact revenge on those who did this horrible crime.

The Crow has a wonderful visual style (the movie is essentially a black and white film), features a fantastic '90s alternative soundtrack (featuring The Cure, Stone Temple Pilots, and Nine Inch Nails among others) and whose story and ending have an underlying sadness on a whole other level because of Brandon Lee's tragic death due to an on-set accident.

But what's it have to do with Halloween?  Well a number of things.
For one, as I mentioned earlier, Eric and Shelley were murdered the night before their wedding on October 30th.  That would have made their wedding day when?
October 31st.
Halloween.
But alas, they did not make it to that day.
In the words of Ernie "I'm a Ghostbuster too" Hudson's character Sgt. Albrecht when asked "Who gets married on Halloween anyway?"  He replies dourly "Nobody."

A year later, when Eric digs himself out of his grave to seek revenge, he breaks into his old gothic apartment.  Still hanging on the door with the police tape across it, is a Halloween decoration:  a paper skeleton with accordion arms and legs and wearing a bow-tie. 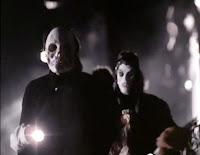 A day passes (making it Halloween day) and after Eric takes out one of the last of the murderers (I'm expediting, go with it), he tiredly sheds his black trench-coat, bows his head and whispers "I'm coming home Shelley..."

At this moment, a pack of running, laughing and costumed trick or treaters run by, shining their flashlights in Eric's face and giggling as only kids hopped up on sugar and late-night excitement can.

As for costumes, here's what I can see in this very noir scene:  the leader is definitely a skeleton.  Always a good choice in my opinion. Behind him is, what seems to be, a Ben Cooper/Collegeville type costume. I can see it's a plastic vampire-like mask.  And there seems to be some colored vinyl front.  But I can't make it out.  (Click the pic to make it bigger and maybe you can tell me.)  In another shot (when they're teasingly circling Eric) I thought I saw the floating bandages of a mummy.
Solid costume choices for a scene that lasts maybe 30 seconds.  Back to the plot and more Halloween connections...

Eric looks up and smiles wide-eyed.  This burst of Halloween fun seems to energize him and he laughs along with them until a freeze frame (re-watching it again for this post it strikes me as odd to have a freeze frame in the middle of the final act and not have it be the ending).

But that's NOT the end of the film and here's my point:  had those trick or treaters, reveling in Halloween, not come along when they did, Eric would have up and died (again) and not been able to save the princess (Sarah) from the tower of the castle (scary old church) and the clutches of the evil wizard (Top Dollar).

Boom.  And THAT is what too much film school will get you.