I had been hearing about Adam Green's Hatchet for a number of years.  How it was an homage to the gory slashers of yesteryear.  How someone had finally created a new movie monster to take the place of the aging Jason Voorheeses and Freddy Kruegereses of the world.  And, after watching it, I can say that it IS all those things.
It is also a horror movie with A HALLOWEEN SCENE.

The film itself takes place in the swamps of New Orleans, hardly Halloween-ish but certainly spooky, and it's around Plot Point One that our smiling jack o' lantern pops up. 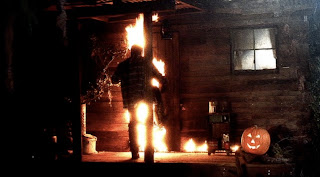 Marybeth (our heroine) tells the rest of the Ten Little Indians the backstory of the creature that's been hunting them:  Victor Crowley.  It seems ol' Victor was born deformed and taunted by the local kids.  On Halloween night (yay!) the kids show up at the cabin in the woods to scare Victor by throwing firecrackers at the door.  Fire and wood don't mix and the cabin goes up in flames.  When Papa Crowley discovers the burning building and tries to save his son by hacking through the front door with a --wait for it-- "hatchet," he inadvertently cuts through the door and into the face of his son... killing?... him?... question mark?... 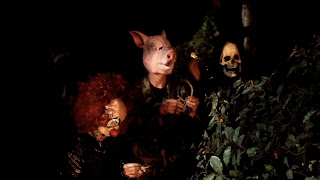 Compliments to Adam for dressing the nasty kids in non-stock Halloween costumes:  no pirate, cowboy and princess here.  Nope.
Instead we are treated to a scary skull mask, a creepy clown (what clown isn't, right?) and a very Saw-like PIG MASK.  Yikes.
(How come Collegeville never made THAT boxed costume?  Complete with a vinyl outfit that says "Bacon."  Mmmmm bacon.)

I think it's a great choice to have a newly created movie monster's origin happen on Halloween.  What better day to be born, right?  Yes, I know John Carpenter and Debra Hill did it first, but Adam has demonstrated himself to be a big Halloween fan in general by releasing short films directly to the web, based on the holiday.
You can check them all out HERE on the ArieScope YouTube channel.
CAUTION:  If you don't like extremely dark humor, gore and foul language... look elsewhere.
I should say the same about Hatchet.  Wait.  I just did.