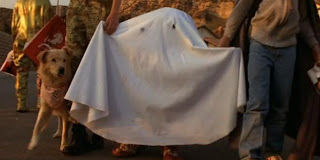 First of all the mom is played by Dee Wallace.  At the time she was "Dee Wallace Stone" and in my heart she always will be just as Meredith Baxter will always be Meredith Baxter-Birney in my mind.
Yeah I know relationships end for actors just like regular people, but if America has seen you be Alex P. Keaton's mom and your name burned into the Chyron credits of a TV Show opening for years, you're obligated to keep it.  Pull a Tina Turner.  Keep your name.
Where were we?
Ah yes, Dee Wallace.

If you like horror movies you know Dee from such classics as The Howling, Cujo, The Hills Have Eyes (1977), Popcorn, Critters and even recent horror films like Ti West's The House of the Devil and Rob Zombie's Halloween (2007).
But to many, she'll always be "The Mom from E.T." and she shows up for Halloween dressed as a cat, complete with leopard-print dress and mask.

Then you've got the kids' costumes.
E.T. is standing in for Firestarter's Drew Barrymore in a Charlie Brown-esque "Ghost" costume.
That old chestnut:  cut eye-holes in a white sheet.
It's a costume I've always wanted to try myself, not for any lack of effort, but more because it's such a classic-Americana Halloween staple.
The ghost-sheet costume is the Warhol Campbell's Soup Can of costumes.  Quote me on that.
Seen in tons of movies and TV shows, I've never known anyone to actually MAKE a simple white sheet ghost costume.  I tried making my own ghost a couple times growing up, and once got as far as having scissors and white sheet in-hand, but was stopped at the last second because I was -ahem- "going to ruin the good sheets."  Whatever.  Halloween is art and art has a PRICE!
Where were we?
Ah yes, the kids' costumes... 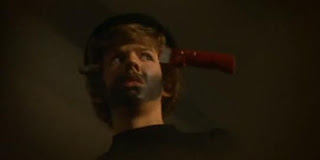 The older brother, Michael, is dressed as a very un-P.C. um, "Murdered Bum."  A bowler hat, 3 o' clock shadow and a knife through his head.  The knife in the head serves a purpose, actually, in that (in one of the first jokes of the scene) E.T. lights up his healing finger and tries to touch it with his catchphrase "Ouch."
I guess the murdered bum worked better than a murdered Quasimodo.  More on that next.

Lastly our hero, Elliot, is dressed as Quasimodo complete with hump on his back and grayed face.

Mom tells them to be back one hour after sundown (Sweet!) and we get to see the front of the decorated house.  The front door has a classic Beistle skeleton (which holds a special place in my heart), along with a ghost and blazing orange "Happy Halloween" sign.  Not to mention a few carved pumpkins on the doorstep.

The kids head out in the development and Spielberg grabs that magic hour when the sun is dipping low in the sky bathing the neighborhood in orange (a Halloween color!) light.  It's that magic twilight time that occurs in late Fall that's perfect for trick or treating.
(Is it just me or does the neighborhood have a striking resemblance to the Poltergeist neighborhood?)

It's about this point in the clip that John Williams's score --you know him... that guy who has scored most of the iconic films in your lifetime-- kicks in.  Per the E.T. Soundtrack CD, the particular piece of music is called, what else?, "The Magic of Halloween." 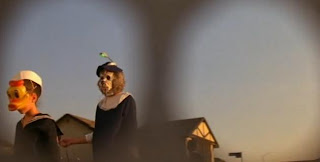 As the kids walk around the neighborhood, we get to see the other costumes through E.T.'s eyes (and a little help from the "pause" button).  A clown, nurse and bumblebee cross, along with Dracula and a cowboy.
A zombie doctor shambles by holding a live poodle wearing a party hat.  I kid you not.
E.T. also stares in awe at an approaching sea monster, duck-sailor and dog-nun (Seriously I've watched it a couple times.  It's a tall person wearing a dog mask and a nun's habit.  A dog-nun.  What else should I call it?)  If I had seen the duck-sailor and dog-nun in The Shining they would have looked right in line with that weird dog-man.  -shiver-

The payoff to this montage is a child walking by in one of the only "licensed" characters featured: a Yoda costume.  E.T. sees Yoda and turns to follow calling after him "Home.  Home!  Home!"
Not only is it an in-joke between fellow "Movie Brats" Spielberg and George Lucas (he did a little film called Star Wars... you should put it in you queue).  But it's a sight-gag that most kids GET.  I tell ya, that type of meta-humor really blew my mind when I saw E.T. as a kid.

Though it's not in this particular clip, it should be noted that E.T. also has a candy connection to Halloween.  The (then) new Reese's Pieces played an integral part in this film.  And I think we all know how --due to M&Ms passing on the product placement-- the VERY Halloween-colored orange and black Reese's Pieces were used instead and shot up in popularity.  Hey if the candy is good enough for aliens, it's good enough for us kids, right?  (A direct quote from my very young brain.)

Lastly, Elliott is carrying a white plastic bag for his treats complete with ghosts and jack o' lanterns on it (check out the pic).  When I would go trick or treating, we used shopping bags that had printed Halloween pictures on them or plastic bags that the local bank or whoever gave out.  Catching this little piece of detail really took me back.  Just one last thing to make, not only this film fantastic but, this Halloween scene one of the best representations of Halloween on celluloid.  Period.