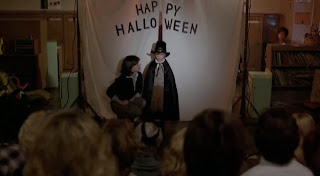 Sweeping the major Academy Award categories by winning Best Director, Picture, Actor, Actress, and Screenplay:  Kramer Vs. Kramer is a motion picture classic.
Its' ultimate achievement, of course, is featuring a "Halloween Scene."

The scene has Dustin Hoffman and Meryl Streep's child Billy (played by Justin Henry) playing the role of the announcer in the school's Halloween Pageant.
He starts with, "Ladies and Gentlemen..." and drifts off with stage fright 'til Hoffman helps from the audience whispering aloud "Welcome to our Halloween Pageant." 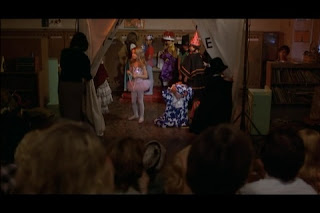 Billy continues through the rest of his lines with some careful prodding from the teacher, "... With ghosts and goblins, and ghostly ghosts and wicked witches and spookety spooks."
The world needs more Halloween pageants!  This sounds pretty awesome.

Then the makeshift bed-sheet-curtain parts, splitting the words "HAPPY HALLOWEEN" and revealing the children dressed in costumes behind it.
No ghosts or goblins or spookety spooks that I can see.

Looks like there's a princess/ballerina front and center... and maybe a wizard (Merlin-ey, not Potter-ey)... but that's about all I can make out.
Did I mention that Billy was wearing a Pilgrim costume in the Halloween Pageant?
On the one hand, it seems a month early, on the other: it's Halloween and there are no rules as to what you can dress up as.
The boy wants to be a pilgrim on Halloween?  So be it.
Though, I hope he dresses as a skeleton for Thanksgiving.

Watch Kramer vs. Kramer for the Halloween scene but STAY for the outstanding acting by two legendary actors in their prime.